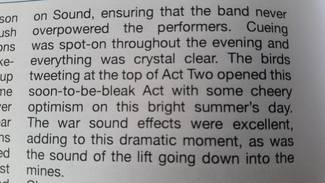 "......Musical Direction was by Ger Madden, whose work was well showcased by Recks Audio
Clara. Sound from the stage was powerful but perfectly balanced, helped in some small part
by the positioning of the band on top of the wooden structures. Every word was crystal clear.
The “Hosanna Superstar” singing from the crowd during the Priests’ scene really sounded
like it was coming from the street........."
loughrea MS "American idiot" 2017

Review for Clara MS "Cats" 2017
SOUND – RECKS AUDIO
A big show to balance the sound especially with the orchestra back stage and the numerous amount of individual mics. To the technicians credit the sound was first class. The balance between pit and stage was perfect. The individual performers were all heard perfectly, without any late cues. The sound effects were excellent and they too were also correct on volume, never drowning out the orchestra nor the singers. Congratulations.
Birr Stage Guild "Oliver" 2013
"The sound balance and cueing was excellent
from Recks Audio, Clara. Sound effects were perfect. We particularly liked the
clock ticking effect and the thunder effect."
Richie Ryan AIMS Review